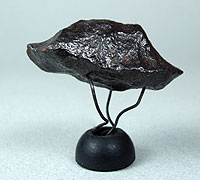 The Hall of Meteorites in New York's American Museum of Natural History has an excellent exhibit (virtual and physical) on meteorites.
Posted by Jim Stewart at 11:22 AM No comments:
Categories: Museum objects, Natural wonders, Personal anecdotes 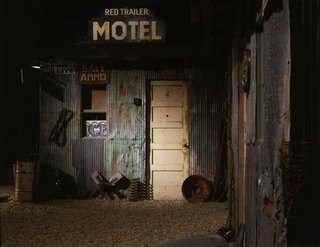 We went down to the de Saisset Museum in Santa Clara last weekend to see Michael McMillen's latest installation, Red Trailer Motel. It will be on view until March 18, 2006. If you go, be sure to walk on the gravel, get up close to the doors and peer into the peepholes!

Michael has a long history of creating both full-size and miniature dioramas, always amazing, involving found objects and set pieces that he has constructed. We were fortunate enough to catch his big show at the Oakland Museum in 1991.

For a good overview of his work, see here. One of the interviews there takes place in his yard, where "stuff" has been accumulating for decades. More details of the Red Trailer Motel can be seen here at his Los Angeles gallery's site.

Permanent installations of his work can be found in the following locations:
- The Los Angeles County Museum has "Central Meridian", AKA "the garage", an amazing walk-through assemblage of a garage that is part Egyptian temple. See here for an interview with him that takes place in the garage.
- The entrance to the Armory Center for the Arts in Pasadena has "Motel (Under the World)" featuring an oil-guzzling robot watching TV in his underground room
- The San Jose Museum of Art has The Third Eye, a peephole into a sixties head shop
- The Oakland Museum has Aristotle's Cage, an evocative miniature diorama of a trailer in the desert.
Posted by Jim Stewart at 1:15 PM 1 comment:
Categories: Artists, Dioramas

My mother is now elderly and frail, but possesses a great independence of spirit. Her vision is failing and her world is getting smaller. She says she rarely remembers her dreams, but recently she told me of a particularly vivid one. She was in a museum with many rooms and great curving walls, but open to the sky. My brother and I were both there, about 10 years old. Lots of people were coming in, but no one was going out as there did not appear to be any exit. The museum was full of exquisite objects, absorbingly beautiful, even indescribable. When she looked around, my brother and I had gone, and she could not find us anywhere.
Posted by Jim Stewart at 8:16 PM 1 comment:
Categories: Personal anecdotes
Newer Posts Older Posts Home
Subscribe to: Posts (Atom)