Skulduggery and Intrigue in the Museum World

The Zymoglyphic Museum has been targeted by the Museum of Dust for a hostile takeover. We recognize that due to staffing shortages the Zymoglyphic Museum's cleanliness may not be up to snuff (and noting that some staff believe that the accumulated dust enhances, rather than detracts from, the exhibits, by lending them a certain air of authenticity and credbility), and that the museum does indeed have a high concentration of desirable rust and decay, and further that the museum, as with all things, must eventually return to dust. Still, we had not expected it to come so soon. The museum's board is meeting even now to assess the threat.

The facts we have so far are these: The Museum of Dust's director goes by the highly suspicious name of Incognita Nom de Plume, or some variation thereof, and has an implausibly long personal history, involving an arachnoid accomplice (who sounds dangerous) and a mysterious entity called "Musrum" whose museum seems destined to suffer a fate similar to our own. We suspect this cabal may be associated with the equally shadowy Athanasius Kircher "Society", of which Kircher himself is the recording secretary and apparently its only member. Kircher had his own museum in Rome over 300 years ago (reduced to dust by now), and had not been heard from since then until he entered the modern age by becoming, like so many others, a blogger.

We will be sifting through the evidence for further clues. 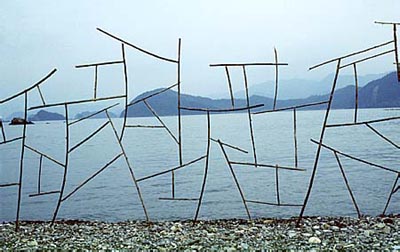 As I noted last week, in David Attenborough's documentaries, the natural world is teeming, bizarre place of baroque mating rituals, predation, and survival. A more bucolic view of nature is one that looks at the beauty in natural forms and patterns. One of the themes in Zymoglyphic culture is making art from natural objects, often with minimal transformation. Andy Goldsworthy is the purest Western practitioner of the craft of arranging natural materials into art forms. Usually, it is a matter of lightly imposing some human abstraction - a circle, spiral, or an unnatural crack - in a natural landscape to somehow achieve a magical effect. Some of his creations are permanent installations in stone, but most are ephemeral structures of ice, leaves, water, sticks or the crackles in drying mud. For these, his photographs become the final creative product and only remaining evidence of the work. The photographs in turn are available in a series of high-quality books. A good survey is Andy Goldsworthy: A Collaboration with Nature 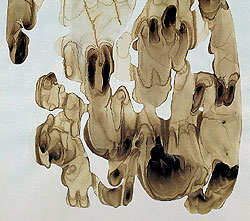 A lesser-known type of work that he does are "snowball paintings", which are created by putting a snowball stained with a natural dye on paper and letting it melt. The result is an amazingly detailed pattern created by the way the dye is deposited as the snow melts and the water evaporates. A detail from one is shown here, with an enlargement here. The Zymoglyphic acrylic paintings achieve a similar effect from the deposition patterns of the (unnatural) acrylic pigment.

, which shows his work in a context of time and motion that you don't see as much in the still photographs. A pile of sticks by the shore is demolished bit by bit by the tides; a string of leaves snakes its way lazily down a creek.

He has two permanent installations in the Bay Area. One is Stone River in front of the Cantor Arts Center on the Stanford University campus, and the other
is at the de Young Museum in Golden Gate Park.
Posted by Jim Stewart at 7:40 AM 1 comment:
Categories: Artists, Natural art, Photography

Life in the Undergrowth 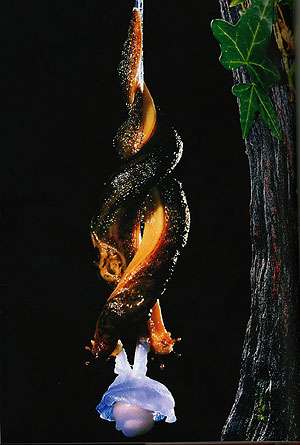 In the Alice books, Lewis Carroll presents reality as pretty boring compared to the world of imagination and dreams. The dreams, of course, may turn out to be rather nightmarish. David Attenborough makes nature documentaries which advance the thesis that the natural world is actually truly amazing if you get down and take a look at it. His latest series, Life in the Undergrowth

, focuses on terrestrial invertebrates. It includes a giant centipede in Venezuela that catches and eats bats, a spider that catches its prey by swinging a silk line with sticky mucus on the end, and leaf cutter ants that eat a particular fungus that they grow on the leaf bits that they gather. Strange eating and mating behaviors are not limited to creatures in exotic locales. Shown here, for example, are two leopard slugs (common pests in gardens) mating while hanging from a tree on a thread of mucus. The blue parts are entwined genitalia, and both are hermaphrodites. Like Wonderland, this world has its nightmarish elements as well, usually deriving from the basic horror of animals eating other animals alive.

There is a nice book

companion to the series, and a web site with video clips, including the slug mating sequence. 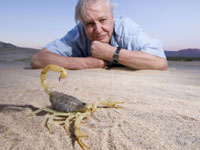 David Attenborough would make an excellent guide to the Zymoglyphic regions as well. He has great qualifications - he had a little museum when he was a boy, and now has huge collection of souvenirs from his travels. He is a perfect mixture of authoritativeness, enthusiasm, wonder, and a taste for the bizarre. A phrase he often uses is "and the strangest of all is this one...". He combines all that with the latest technical wizardry in closeup photography and has an engaging personal style. He is always on the scene, often windblown or out of breath, battling mosquitos to sneak up on some hapless creature. He keeps up with recent discoveries, so each series often includes some new odd animal, plant, or behavior that I have not heard about. He has covered a full range of biological and anthropological themes, and he has managed to contribute to science without having to specialize. He always has interesting ideas on the interconnectedness of things; not just describing some odd behavior, but explaining what forces have caused it to evolve that way. If he is not available for the job (as is likely), he can still serve as a role model!
Posted by Jim Stewart at 1:34 PM 2 comments:
Categories: Natural wonders

Alice and Me in Wonderland 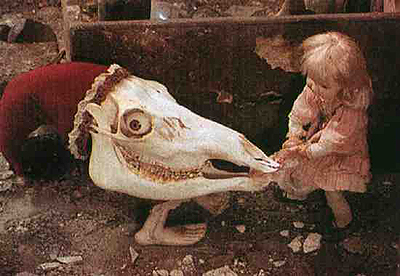 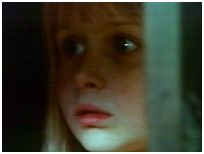 I must have seen the Disney version of Alice in Wonderland

on TV when she and I were the same age. I watched it again just recently and remembered how spooky it was, especially the Cheshire cat. The poor girl, it seemed to me, was just trying to get along in the this strange world and no one will help her; they can only speak in riddles and nonsense.

In high school I discovered Martin Gardner's The Annotated Alice

. I was fascinated by the fact that Lewis Carroll was a mathematician and logician, and that the Alice stories were full of logical conundrums, linguistic inventions, propositional calculus and chess strategy. I also liked the way Carroll captured dream logic. In one scene, Alice is in a shop trying to focus on an interesting item on a shelf, but it is always on the next shelf above. When she tries to trap it at the top, it disappears through the ceiling. 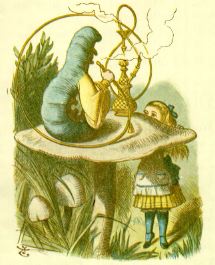 I was quite tickled when the Jefferson Airplane had a hit with White Rabbit, since it was based on what I was then seeing as an rather intellectual exercise. In college, the Disney film was in heavy rotation at campus film fests. Alice, her mushrooms, and the "hookah-smoking caterpillar" had now become psychedelic icons, the rabbit hole a gateway to an alternate reality. Like Carroll, I was equally fascinated by math and logic, and by the free form view of reality that nonsense provided.

This whole reminiscence of Alice started when I watched Jan Svankmajer's film, Alice

. In this version a mostly-live-action Alice (sometimes transformed into a doll) chases a taxidermied rabbit that has broken out of its case and is leaking sawdust as he runs. She is beset along the way by an amazing variety of monsters and chimeras, such as he one shown above.