Xenophora - Assemblage Artists of the Deep! 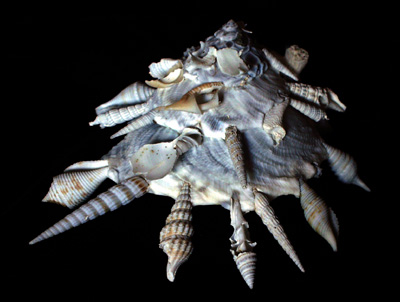 The Peninsula Museum of Art's fall exhibit will be "Obsessions: Selected Personal Collections", including the Zymoglyphic Museum's collection of molluscan collectors from the genus Xenophora. The museum is located in Belmont, CA, just south of San Mateo, and the show runs from Sept. 27 through December 3. A reception will be held at the museum on Saturday, Sept. 27, from 1 to 4 PM, and all are invited to attend.

Xenophora are marine snails that collect shells, stones, coral, and the occasional coin or glass shard. They attach these objects to their shells as they grow. A snail's shell grows by adding to the opening, and the snail attaches objects to this opening as it grows. Some snails consistently choose similar objects, resulting in neat radiating patterns; other collect a wild jumble of dissimilar objects.

A number of explanations have been advanced for the collecting behavior. Xenophora that live in shallower water, where there is enough light for them to be seen, probably use their collections for camouflage. Even in deeper waters the attachments may serve as a camouflage from predators that hunt by feel. Xenophora that live on muddy sea bottoms attach extensions to their shells to spread out the shell's surface area. This can help prevent the animal from sinking into the mud, and keep the shell's opening above the substrate. The additions may also strengthen the snail's relatively thin shell.

There is an unfortunate shortage of solid scholarly information on these animals. The only monograph in the field, Ponder's Xenophoridae of the World, is long out of print and difficult to find. This collection is thought by some museum visitors to be a hoax, displayed as it is alongside the museum's mermaid tank and its denizens being billed as "assemblage artists".
Posted by Jim Stewart at 7:29 AM No comments:
Categories: Museum collections, Museum news, Natural art, Natural wonders
Newer Posts Older Posts Home
Subscribe to: Posts (Atom)