The Garden of the Four Monks 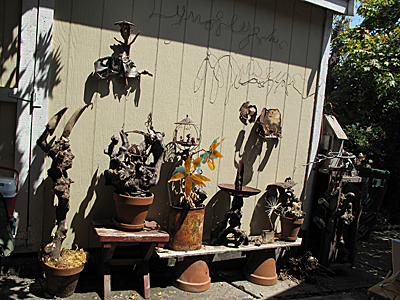 The Museum's forecourt has gotten a major upgrade this summer, inspired by a generous grant of rusty materials, woody scraps, and other curiosa from Neva Beach. One may be forgiven for picturing Neva Beach as a pleasant shoreside locale where one can find treasures from the sea, and this is, in a sense, true, but Neva, properly speaking, is a person, not a place. 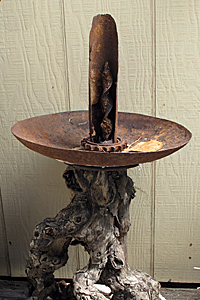 The xeriscape gardening against the museum's front wall is based on some gnarled stumps and includes of a number of strange plants endemic to the Zymoglyphic Isles, including land sponges (zoophytes, in fact, not plants at all) and the legendary Giant Rust Flower. This last flowers only once in its lifetime, but spectacularly, a huge colorful bloom; the flower then rusts in place, decaying slowly thereafter. Other plants derive their drought tolerance from metallic and plastic components.

The theme for the landscaping is the legend of the four Zymoglyphic monks, a tale from the Era of Oriental Influence. An ancient tradition holds that enlightenment can be sought in the study of nature and natural forces, especially rust. According to the tale, each monk set out to seek enlightenment, but as is so often the case, different schools of thought prevailed. 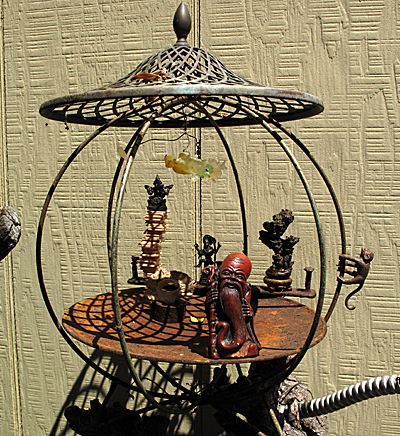 The Scholar Monk maintains a well-stocked library, surrounding himself with the writings of the great minds and kindred souls of the ages. He studies and reflects on them, compiles, analyzes, and synthesizes his research. He collects art and significant objects for inspiration (a favorite viewing stone, a copper nodule, is currently on display). He has staked out a breezy top-floor aerie in one of the garden plants, and installed a mobile that makes the wind visible. A little monkey comes to visit sometimes to remind him to get his nose out of his books and reconnect with nature. 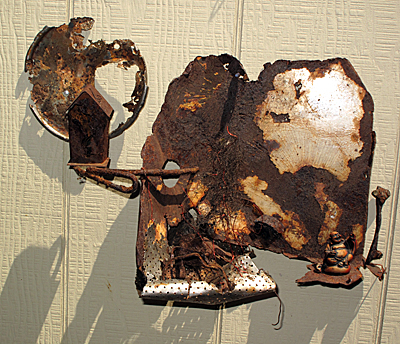 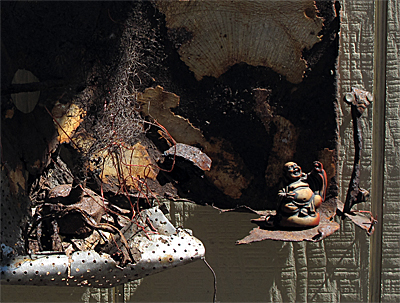 The Rust Monk is less interested than the Scholar Monk in what other people have said and done. He wants to find his own unique way, unencumbered by the past, listening to an inner voice. He seeks enlightenment from his creative expression, to express things that cannot be said in words. He has collected a number of rusty objects and assembled them to create a complex living environment. His creation floats above the garden, not rooted in any part of it. 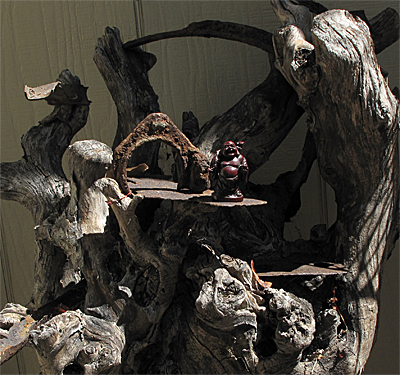 The Wandering Monk has decided to rid himself of the distractions of possessions, collections, books, and art, no matter how pure or ennobling they may be. He has kept only a bag full of necessities and set off to wander in the wilderness, savoring the freedom of the adventure, to see what nature and rust can teach him. In the twists and turns of the thick branches of an ancient stumpy tree, he has found a rusty viewpoint from which to view the passing scene and get some perspective on the world. He will soon be moving on in his restless quest. 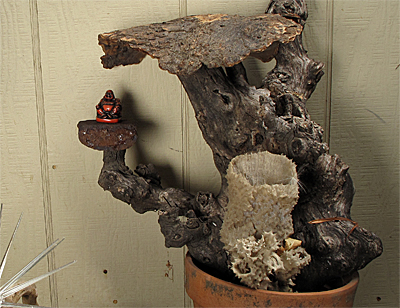 The Shelter Monk is a sort of hermit. Like the Wandering Monk, he has cast away his possessions, but he is content with a simple place to sit in quiet, inward contemplation, sheltered from the buffeting environment. He believes that each part of the universe contains the whole and one need only stay in one place and fully experience it to attain the sought-after enlightenment. It is not necessary to go from one place to another. He has found his spot on a flap of rust, under a wide natural shelter, and he plans to stay there.
Posted by Jim Stewart at 10:00 PM 3 comments:
Categories: Museum news, Orientalia
Newer Posts Older Posts Home
Subscribe to: Posts (Atom)