The museum will once again be trundling down the Peninsula from San Mateo to Palo Alto, bringing its roadshow to the annual Book Arts Jam on October 19!

The Zymoglyphic Museum Press will have available the full range of its publications as well as a selection of prints from the series Views of the Zymoglyphic Region.

The Zymoglyphic Postal Service will be well represented by a selection of postcards, a sample of which may be seen here.

This event takes place at the Lucie Stern Community Center, 1305 Middlefield in Palo Alto, from 10 AM to 4  PM, and features a fine survey of local book and print artists.

Hope to see you there!

Museum at the Maker Faire

Two of San Mateo's great cultural attractions will be joining forces as the Zymoglyphic Museum trundles its roadshow 15 blocks up El Camino Real to the Maker Faire!  The Faire's annual mass outcropping of creativity takes over the county fairgrounds this coming weekend!

The museum's focus will be to encourage those who find themselves in possession of disorganized detritus to make their own museum out of it.  We feel that the personal museum is a woefully underused form of creative expression!

We will be sharing space with the Bellybutton Museum, which is currently curating a collection of navel photographs.   More information on that project here.

We will be located in the Fiesta Building, Wing B.
Posted by Jim Stewart at 7:16 PM No comments:
Categories: Museum news

Open Days at the Museum - May 4th and 5th

The Zymoglyphic Museum will once again be open for a skeptical public to see the museum's exhibits, dioramas, and environs in person the first weekend in May.  That's May 4th and 5th from 11 AM to 5 PM as part of Silicon Valley Open Studios.  New this year will be a fine selection of post cards which will serve as convenient and economical souvenirs of your visit, as well a new modern art gallery! There will also be a full assortment of publications and prints available.  Contact the museum if you wish to have a specific print available when you arrive.

You will also be able to see the pinhole photography, pinhole cameras, artist's books, and other wonders of Judith Hoffman

The carless (or others so inclined) may wish to hoof it from from the Hillsdale train station, which is about a 15 minute walk away.  See directions here.
Posted by Jim Stewart at 8:41 PM No comments:
Categories: Museum news 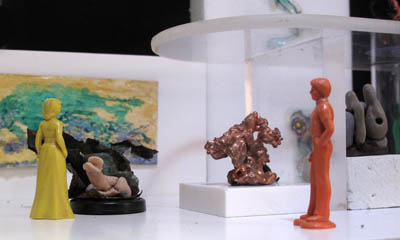 The museum is proud to announce the completion of its new Art of the Modern Age gallery. Measuring just under a square foot, this miniature temple of modernism is snugly sited on a shelf under the museum's lone windowsill. It replaces the dilapidated shoebox art galleries and features found art (including examples from the Natural Modernist school) and miniature works from the Biomorphic movement.
Posted by Jim Stewart at 1:30 PM No comments:

The essence of a museum is arguably its physical location and its tangible collections.  You may see with your own eyes, for example, the full original of a painting you have only dimly glimpsed in black-and-white in an art textbook,  or marvel at ancient artifacts from vanished civilizations.

However, we are also interested in literary museums, those that consist only of words and whose construction is unencumbered by the laws of physics.

Italo Calvino's Invisible Cities imagines Marco Polo spinning tales for Kublai Khan about the metaphysical communities that he has encountered in his travels around the Kublai's vast empire.

One of these cities has a museum and here is its story:

In the centre of Fedora, that grey stone metropolis, stands a metal building with a crystal globe in every room. Looking into each globe, you see a blue city, the model of a different Fedora. These are the forms the city could have taken if, for one reason or another, it had not become what we see today. In every age someone, looking at Fedora as it was, imagined a way of making it the ideal city, but while he constructed his miniature model, Fedora was already no longer the same as before, and what had until yesterday a possible future became only a toy in a glass globe.

The building with the globes is now Fedora's museum: every inhabitant visits it, chooses the city that corresponds to his desires, contemplates it, imagining his reflection in the medusa pond that would have collected the waters of the canal (if it had not been dried up), the view from the high canopied box along the avenue reserved for elephants (now banished from the city), the fun of sliding down the spiral, twisting minaret (which never found a pedestal from which to rise).

On the map of your empire, O Great Khan, there must be room both for the big, stone Fedora and the little Fedoras in glass globes. Not because they are all equally real, but because all are only assumptions. The one contains what is accepted as necessary when it is not yet so; the others, what is imagined as possible and, a moment later, is possible no longer.