Ikebana: An Ancient and Modern Natural Art from Japan 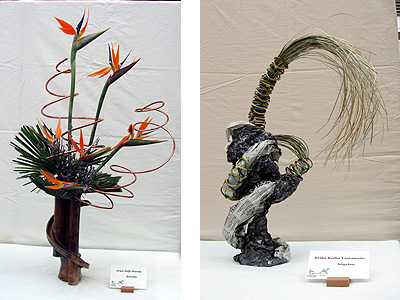 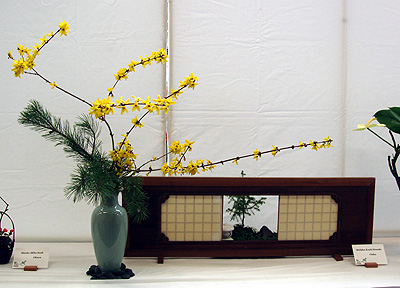 I went up to San Francisco last weekend to see the biennial Ikebana Flower Show in Golden Gate Park. Ikebana originated some five hundred years ago in medieval Japan as a spiritual expression of natural energies, often in association with Zen Buddhism. It is primarily a formal arrangement of flowers, branches, and a variety of other objects, usually placed on a stand or in a vase. Ikebana can celebrate any season, but it is at its best as celebration of the rebirth of nature in spring.

Both ancient and modern approaches were represented in the show. The arrangement at the top left, by Grace Murata, is in the Ikenobo style, a traditional school which dates back to the 15th century and emphasizes formal training. On the upper right is a more modern version from Keiko Yamamoto using hair clips and wadded up newspaper, in the Sogetsu style. Sogetsu is a school founded in 1927 which encompasses a broad range of styles, including free form and avante-garde, and invites participation by anyone. The lower arrangement, by Michiko Hosada, is an example of the Chiko school, which can include architectural elements, figures, and other objects to create symbolic landscapes. Examples from some of the many other schools of ikebana can be seen here and here.

Ikebana is much like Zymoglyphic art, especially that of the Era of Oriental Influence. Both are based on the assemblage of (mostly) natural objects, selected, arranged, and composed for a poetic effect, and placed in some framing context, such as a stand or a decorative vase. Both aspire to be something more than simple decoration. An ikebana arragment, such as the one shown below, may contain materials familiar to fans of Zymoglyphic art, such as dried fungus, mossy branches, gnarled driftwood, wire, seaweed, or rusty objects (although we are unaware of any ikebana containing dead animals). The focus on fresh flowers usually makes ikebana a more evanescent art than a typical Zymoglyphic artist would prefer, needing to be constantly renewed and redone, surviving only in pictures and memories. The museum's curiosity cabinet contains an example of a more durable ikebana arrangement, acquired at the 1998 ikebana show. 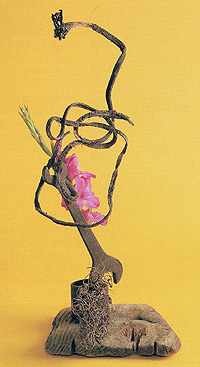 A good introduction to ikebana, focusing on the wide-ranging Sogetsu school, is Ikebana: A Practical and Philosophical Guide to Japanese Flower Arranging

The image here is taken from that book.
Posted by Jim Stewart at 1:32 PM No comments:
Categories: Museum objects, Natural art, Orientalia 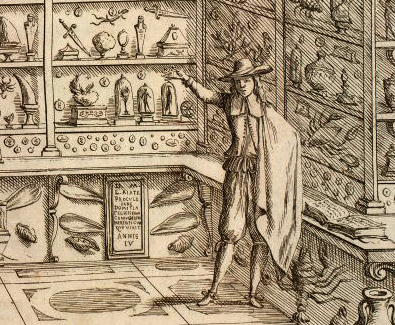 Our esteemed cyberpatrons are welcome to take a virtual tour of six personal museums from Europe's Baroque era. One of them, Athanasius Kircher's museum, was featured here recently. Above, Ferdinando Cospi beckons across the centuries and invites us to pore over his collection of lizards, things in jars, sealife, figurines, weaponry and objects of all kinds.
These personal museums may be considered early forerunners of the Zymoglyphic Museum, sharing a goal of collecting wonders rather than instructing the public in literal facts. While they reflected the personal interests of their creators, these early museums contained enough variety to create within their walls a microcosm of the world.
Posted by Jim Stewart at 4:05 PM No comments:
Categories: Other Museums
Newer Posts Older Posts Home
Subscribe to: Posts (Atom)