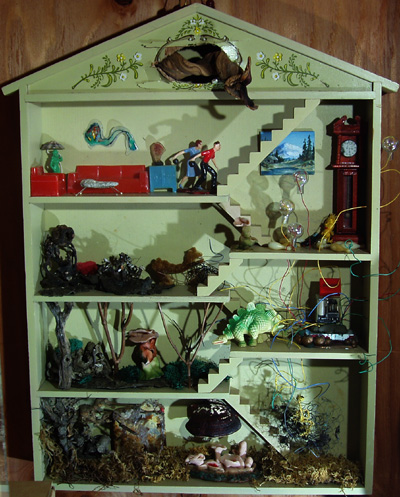 The Zymoglyphic Museum has just added a new diorama in an unusual style. Zymoglyphic dioramas are most frequently constructed in fish tanks or vitrines; this one uses an old display case to show a modern couple connecting to their "roots" in a most literal sense. For another view of domesticity in a diorama, see The Quiet Parlor of the Fishes
Posted by Jim Stewart at 8:05 PM
Categories: Dioramas, Museum objects

Our accountants have finally gotten around to tabulating and analyzing the vast lack of sales in the museum shop for fiscal year 2006. Since we cannot use any positive integers to describe the sales figures, we are looking into the feasibility of utilizing transcendental or imaginary numbers instead. Our statisticians remain stymied by the necessity of having to divide by zero.

Our marketing department recently convened a focus group consisting of the shop's entire customer base to review our offerings. In accordance with the group's findings, we have added a number of fine items to our once meager product line, including a mousepad and bumper stickers. As always, rebellious young ladies (and their suitors) should take particular note of our "thong" undergarments featuring the controversial and possibly inappropriate "flying dead mouse" design.

Our outside marketing consultant, Harry "The Axe" Warbler, suggested that we "cut prices down to the jugular vein!!" and proclaim "we've lost our heads!!!." His proposed accompanying visuals, while undeniably edgy and eye-catching, were rejected by the good taste committee as unnecessarily graphic. However, we are pleased to announce that prices have indeed been reduced and are now so low we would need to consider cash incentives to convince potential customers to avail themselves of our merchandise. Harry suggests, possibly sarcastically, that perhaps our slogan should be "Please be sure to take advantage of the situation before our peripatetic cephalic appendages are located and properly reattached."
Posted by Jim Stewart at 3:01 PM 4 comments:
Categories: Museum shop

The Zymoglyphic Museum has added a significant new collection to its Rust Age holdings - a set of copper scrolls depicting the mythical Primordial Ooze. During the Rust Age, most artifacts were constructed using naturally weathered materials, whether rusty metal or partially decayed organic matter. However, there were attempts by early Zymoglyphic alchemists to reproduce these effects artificially, a collaboration of art and nature (following, as always, the dictum "Let nature do the detail work").

European alchemists had a goal to transform base metals, such as copper, which were subject to corruption through natural oxidation, into pure gold, which was incorruptible and did not tarnish or weather. Zymoglyphic alchemists were more interested in maximizing the corruption of the base metal; purity was seen a sort of bland homogeneity. The Zymoglyphic ideal was to transform something relatively pure, such as a sheet of copper, into something more complex and interesting. Alchemists in both cultures sought to release "spirit in matter" through the symbolic dissolution of metal and creation of its fermentation byproducts.

Zymoglyphic alchemists used many of the same chemicals on their copper that their European counterparts used to transform metal - blue vitriol (copper sulfate), sal ammoniac (ammonium chloride), liver of sulfur, and common salt, as well as biologically derived fluids such as vinegar and urine. By applying this process to scrolls of sheet copper, they produced pre-literate "books" that told the story of the creative ferment in the primordial ooze. During the Zymoglyphic Age of Wonder, alchemists focused more on metaphysical transformations, rather than chemical ones, as can be seen in this alchemical apparatus from that era.

Copper has been valued throughout Zymoglyphic history. It is one of the very few metals besides gold (and iron meteorites) to be found naturally in pure metallic form. Copper ores can be very attractive, particularly green malachite and and its brilliant blue relative, azurite. Both are chemically closely related to copper patina, or verdigris. The museum has a particularly nice specimen of malachite which was mounted as a viewing stone during the Era of Oriental Influence. A mineral specimen containing both malachite and azurite was incorporated into the Age of Wonder's small cabinet of wonders, and a complex nodule of metallic copper is on display as a miniature sculpture in one of the Modern Era's shoebox art galleries.

Some further references on historical alchemy:

The Golden Game: Alchemical Engravings of the Seventeenth Century

Carl Jung's take on the symbolism of alchemy as personal transformation

The Forge and the Crucible: The Origins and Structure of Alchemy