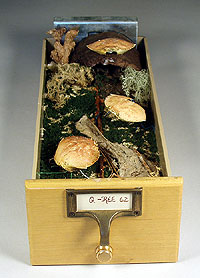 Last summer I was invited to participate in a project called The Curiosity Cabinet of the Collective Unconscious. The "cabinet" in question was an old library card catalog. Each participant got a drawer in which to create something having to do with the "collective unconscious". In mine, I ended up making a diorama featuring a little family of 3 crab carapaces in a wooded setting (shown here - click for larger view). I mostly work by just putting things together, often precariously, carrying them out to the museum, and possibly having to repair them when Open Studios rolls around. This was the first time that I had made something that needed to be shipped somewhere. The crabs had wires for legs, so they could be secured fairly easily, and the rest was glued or wired down. It was worth it to me to be part of a collaborative project, which was a welcome change for me.
The drawer had its debut with the rest of the cabinet at the Hive Gallery in August, which provided me with a good excuse to go down to L.A. for an extended weekend. The cabinet then traveled to Burning Man in September to become part of a funhouse that was installed in the base of the Man. The cabinet must have survived the inevitable fiery immolation of its host, as it has recently surfaced again at Create:Fixate in Los Angeles.
Posted by Jim Stewart at 7:27 PM
Categories: Dioramas, Museum news, Personal anecdotes