Our director at the Museum of Dust has recently acquired a lovely speck of cosmic dust, and those clever guys in the Zymoglyphic Museum's curatorial department have mounted it as a viewing stone, carrying "miniature" to its logical extreme. The curator has gone the director one better by finding an even smaller cosmic mote, this one a scant eight micrometers high (below). I will leave it to Dir. de Plume to figure out how exactly to incorporate these prizes into the MoD bonsai garden. Obviously they won't take up much room! 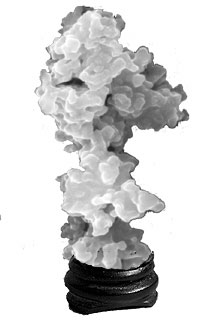