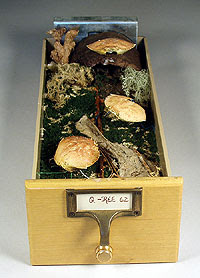 Last summer I was invited to participate in a project called The Curiosity Cabinet of the Collective Unconscious. The "cabinet" in question was an old library card catalog. Each participant got a drawer in which to create something having to do with the "collective unconscious". In mine, I ended up making a diorama featuring a little family of 3 crab carapaces in a wooded setting (shown here - click for larger view). I mostly work by just putting things together, often precariously, carrying them out to the museum, and possibly having to repair them when Open Studios rolls around. This was the first time that I had made something that needed to be shipped somewhere. The crabs had wires for legs, so they could be secured fairly easily, and the rest was glued or wired down. It was worth it to me to be part of a collaborative project, which was a welcome change for me.
The drawer had its debut with the rest of the cabinet at the Hive Gallery in August, which provided me with a good excuse to go down to L.A. for an extended weekend. The cabinet then traveled to Burning Man in September to become part of a funhouse that was installed in the base of the Man. The cabinet must have survived the inevitable fiery immolation of its host, as it has recently surfaced again at Create:Fixate in Los Angeles.
Posted by Jim Stewart at 7:27 PM No comments:
Categories: Dioramas, Museum news, Personal anecdotes 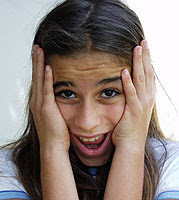 In a misguided attempt to "sex up" the museum shop's offerings and get sales moving from their current abysmal numbers, the museum's marketing department has decided to offer Zymoglyphic-branded thongs for sale. These items feature the same "flying-mummified-mouse" design which has proved so unpopular for the hats. This idea immediately ran into trouble with the Good Taste Review Board, which nixed the accompanying marketing campaign. However, the thong is still available for purchase. As a special treat for "behind-the-scenes" web log readers, the proposed campaign may be seen here. The models are "The Three Graces" by Raphael. The background image is taken from Wikipedia which states that the image may be "freely...exploited in any way by anyone for any purpose, commercial or non-commercial". We have taken "exploited" fairly literally here. Our spokesmodel Ileana, shown here, is not sure what to make of all this.

A Fantasy Museum Made Entirely of Words

While reminiscing about Ferdinand Cheval's "ideal palace" in the last entry, I was reminded of Steven Millhauser's story "The Barnum Museum", in the book

by the same name. It is not so much a story as a 20-page description of a fantastic museum of the imagination. The scene is set:

The Barnum museum is located in the heart of our city, two blocks north of the financial district. The Romanesque and Gothic entranceways, the paired sphinxes and griffins, the gilded onion domes, the corbeled turrets and mansarded towers, the octagonal cupolas, the crestings and crenellations, all these compose an elusive design that seems calculated to lead the eye restlessly from point to point without permitting it to take in the whole. in fact the structure is so difficult to grasp that we cannot tell whether the Barnum Museum is a single complex building with numerous wings, annexes, additions, and extensions, or whether is it many buildings artfully connected by roofed walkways, stone bridges, flowering arbors, booth-lined arcades, colonnaded passageways.

He goes on to describe the rooms and the exhibits, the Hall of Mermaids, the three subterranean levels, the Chamber of False Things, and even rooms full of ordinary objects.
Even the gift shop is full of wonders:

Old sepia postcards of mermaids and sea dragons...mysterious rubber balls from Arabia that bounce once and remain suspended in the air...shiny red boxes that vanish in direct sunlight...Those who disapprove of the Barnum Museum do not spare the gift shops, which they say are dangerous. For they say it is here that the museum, which by its nature is contemptuous of our world, connects to that world by the act of buying and selling, and indeed insinuates itself into our lives by means of apparently innocent knickknacks carried off in the pockets of children.

Millhauser is one of my favorite writers, a wonderful blend of fantasy and literariness. His stories cover areas of interest to fans of the wondrous, such as automatons, illusionists, vast underground complexes, endless department stores, huge amusement parks, as well as vignettes of ordinary life.

In an interview, he says:

What interests me — not exclusively, but in relation to the monstrous — is the place where the familiar begins to turn strange. When things cease to be themselves, when they begin to turn into something else, which has no name — that is a region I'm always drawn to. This, I think, accounts for my interest in night scenes, in childhood, in bands of prowling adolescent girls, in underground and attic places, in obsession, in heightened states of awareness. In this sense, it might easily be argued that the wondrous and the monstrous are very much the same. 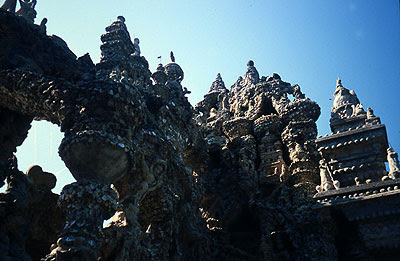 This entry was inspired by the Athanasius Kircher Society's "Visionary Architecture Week" and its coverage of the "Palais Ideal" in southeastern France. The palace was built by Ferdinand Cheval (1836-1924) over a period of some 33 years and it has been number one on my must-see list for many years. He built it using stones gathered on his rounds as a postman, as well as creating his own forms. I finally made a pilgrimage here in the fall of 2002. It is a wonder to behold. It contains a melange of architectural styles (real and imagined) with columns, arches, turrets, passageways, terraces, and giant statues. Inside and out are grottoes, galleries, rock gardens, and all manner of organic plant and animal creations emerging from it.

The Surrealists were fond of it, especially Andre Breton, who proclaimed Cheval as one of his own. Cheval has an entry in the Concise Encyclopedia of Surrealism

which says, "The fantastic style of the palace...was often referred to by the Surrealists as an example of dream-life entering the real world."

as an autobiography of sorts. He says:

I used to build a fairy-like palace [in my] imagination with all that the genius of a humble man could conceive (with grottoes, towers, gardens, castles, museums and sculptures) ...It so happened that just when my dream was gradually sinking in the mists of oblivion suddenly an incident brought it all back to me: I stumbled on a stone that nearly made me fall. I wanted to examine it closely, my stumbling block: its shape was so bizarre that I picked it up and took it away with me. The following day I went back to the same place and I found more beautiful stones which, gathered on the spot, looked so pretty and filled me with enthusiasm. Then I said to myself: ‘Since Nature provided me with sculptures I shall become an architect and a mason (besides who isn’t a bit of a mason?).' 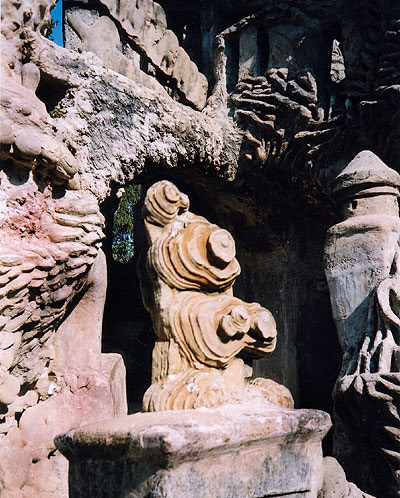 Among the many details of the palace, one aspect that was of particular interest to me was his display of interesting stones. The inspiring "stumbling block" he mentions can be seen here, perched on a pedestal on an upper terrace, just as any viewing stone might be. A particularly intricate and organic rock has been framed in its own grotto like a religious icon. Some of the rocks which he found contained fossils and other pictorial elements. They are on display together in another nook as the "Museum of Antediluvian Stones".

(text in French). This book may also be found at amazon.fr.