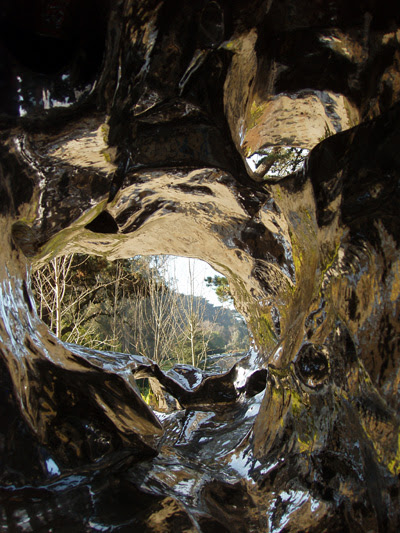 Zhan Wang is a Chinese sculptor who has created a number of metal viewing stones in stainless steel, titled simply "Artificial Rock". He makes them by forming stainless steel over a selected rock, peeling away the metal, assembling the pieces into a hollow copy of the original stone, and polishing to a reflective shine. The result combines the complex forms and organic textures of the original stone with the sleek modernity of chrome.

Most of the artificial stones are one or two feet high, but there is one of monumental size in the de Young Museum's sculpture garden. Taking close-up photographs of the stone creates a sort of "found art". The rough texture creates a vertiginous funhouse mirror effect and, with no color of its own, the surface takes on the colors of the surrounding environment. Green patches are the reflection of surrounding vegetation, blue pools come from the sky, and the dark areas are shadows, often the photographer's own.

Zhan Wang has created his own series of similar photographs, an example of which can be found here. 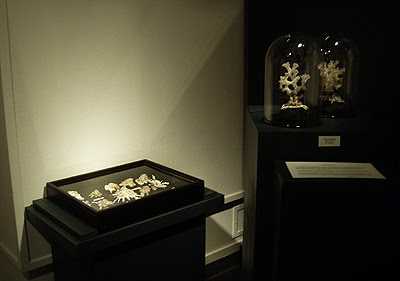 While hapless seekers of natural wonders waited in a mile-long queue to view the rebuilt California Academy of Sciences last Saturday, a much more intimate experience was to be had a few miles to the south at the opening of the "Obsessions" exhibit at the Peninsula Museum of Art in Belmont. The show features a number of private collections, including the Zymoglyphic Museum's Xenophora collection.

Visitors peered closely at these little snails that collect shells, stones, and other objects and attach them to their shells as they grow. Some wondered if they were constructed objects, perhaps a subtle variation on the shell figures sold as seaside tourist souvenirs. Most were amazed that such apparently simple creatures could create such interesting and aesthetically pleasing works. One visitor of a certain age was indignant that she had not known about these animals before, believing that if such an interesting thing existed, surely she would have heard about it by now.

Shell collectors tend to prize shiny, smooth, and rare specimens. They find the "shells that collect shells" idea amusing but there does not seem to be much interest collecting them. Xenophora attract little scientific interest; the Zymoglyphic Museum's Xenophora collection rivals that of the Academy of Sciences itself, which, according to its invertebrate collection catalogue holds only 18 specimens of the family Xenophoridae.

The subtitle of the "Obsessions" exhibit is "Private collections and the history of art museums", highlighting the idea that art museums evolved from the wunderkammern of the European Baroque era. Private collectors amassed curiosities of all kinds. There was a keen interest in natural wonders, and shells in particular. It's in the art museum that the Xenophora can be fully appreciated as natural wonders and and as aesthetic objects with a more than superficial beauty, as well as the conceptual satisfaction of a collection of collectors in a collection of collections.

Thanks to Ruth Waters for including the collection in the show and DeWitt Cheng for the creating the professional display. The show runs until the end of the year.
Posted by Jim Stewart at 11:43 AM 1 comment:
Categories: Museum collections, Natural art, Natural wonders

Xenophora - Assemblage Artists of the Deep! The Peninsula Museum of Art's fall exhibit will be "Obsessions: Selected Personal Collections", including the Zymoglyphic Museum's collection of molluscan collectors from the genus Xenophora. The museum is located in Belmont, CA, just south of San Mateo, and the show runs from Sept. 27 through December 3. A reception will be held at the museum on Saturday, Sept. 27, from 1 to 4 PM, and all are invited to attend.

Xenophora are marine snails that collect shells, stones, coral, and the occasional coin or glass shard. They attach these objects to their shells as they grow. A snail's shell grows by adding to the opening, and the snail attaches objects to this opening as it grows. Some snails consistently choose similar objects, resulting in neat radiating patterns; other collect a wild jumble of dissimilar objects.

A number of explanations have been advanced for the collecting behavior. Xenophora that live in shallower water, where there is enough light for them to be seen, probably use their collections for camouflage. Even in deeper waters the attachments may serve as a camouflage from predators that hunt by feel. Xenophora that live on muddy sea bottoms attach extensions to their shells to spread out the shell's surface area. This can help prevent the animal from sinking into the mud, and keep the shell's opening above the substrate. The additions may also strengthen the snail's relatively thin shell.

There is an unfortunate shortage of solid scholarly information on these animals. The only monograph in the field, Ponder's Xenophoridae of the World, is long out of print and difficult to find. This collection is thought by some museum visitors to be a hoax, displayed as it is alongside the museum's mermaid tank and its denizens being billed as "assemblage artists".
Posted by Jim Stewart at 7:29 AM No comments:
Categories: Museum collections, Museum news, Natural art, Natural wonders

Museum Opens Doors to Public May 3rd and 4th! 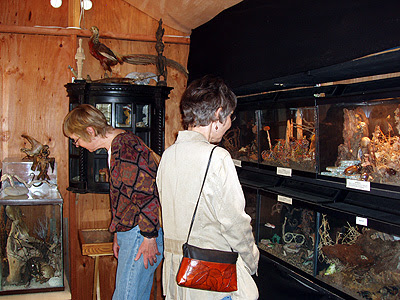 The Zymoglyphic Museum will open its doors to the public as part of the annual Silicon Valley Open Studios event. You will have a rare opportunity to see first hand the famous miniature dioramas, the curiosity cabinets, the crab, Xenophora, and viewing stone collections; inhale the heady air of decay; peer into the mermaid tank; lounge in the warm shade of a maple tree in the museum's forecourt, sipping lemonade, sampling crunchy snacks, and discoursing on the meaning of it all with the museum's curator. Note that this will be a solo turn as Mrs. Curator is taking a break this year and will not be participating. The Cafe Ruste will be operating as usual; however, service is restricted by museum policy and local ordinance to persons or other sentient beings under 3 inches tall. For those less vertically challenged, the Museum Shop will have on hand tempting samples of the daring new spring fashions for 2008, as well as enduring and comforting classics.

The museum will be open from 11 AM to 5 PM both days. Directions here. Vehicularly challenged patrons, or anyone so inclined, may take the train to the Hillsdale station and trundle on up to the museum, a healthy 3/4 mile hike.

The Maker Faire, a sort of science fair for mad scientists, inventors, and tinkerers, will be held the same weekend a scant 1.5 miles away from the museum - see directions here.

Penjing - Chinese Landscapes in a Tray 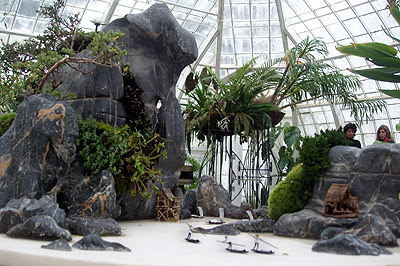 Penjing are small dioramas that depict idyllic scenes in a tray using stones and living plants, carefully selected and arranged for the desired effect. The art form dates back at least 1300 years in China. Tree penjing was a style that showcased miniature trees, an art form familiar today as bonsai. Landscape penjing is another variety that creates three-dimensional versions of the idealized landscapes depicted in traditional Chinese painting. The stones used are selected for texture and form that represent in miniature a fantastic geology of caverns and dizzying vertical drops. Plants are added to make the arrangement come alive. The scenes are populated only by the occasional hut and the little boats that wend their way through the landscape.

An exhibit of ten landscape penjing is currently on view in the aquatic plant room of the Conservatory of Flowers, the big Victorian greenhouse in San Francisco's Golden Gate Park. They will be there until April 27, 2008. The photograph above is closeup of one of them and others can be seen at Flickr.

Tray landscapes were popular during the Zymoglyphic Era of Oriental Influence. The only one currently in the museum's collection shows more of an emphasis on whimsical, rather than idyllic, theme and the use of strange dried stuff in place of stones and living plants.

An excellent book on penjing is
Penjing: Worlds of Wonderment: A Journey Exploring an Ancient Chinese Art and Its History, Cultural Background, and Aesthetics

. The associated Web site is here

The Conservatory show was reviewed in the San Francisco Chronicle

Spring Fashion at the Museum Shop 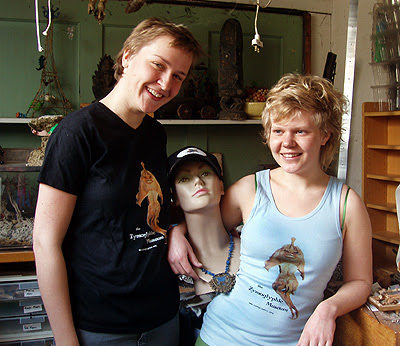 A gloomy, rainy, mid-winter weekend was brightened by the visit of a pair of charming visitors from Denmark. Lise Kroner (right) is a singer and musician whose work can be heard here. Astrid Sahl Andersen (left) is a storyteller and president of the newly formed "Zymoglyphic Museums danske fanklub". Astrid has an unusual collecting specialty - foster grandparents. The museum's curator and his wife have now been added to her collection.

Lise and Astrid graciously consented to model the museum shop's fashionable new spring line of mermaid-themed apparel, featuring the Zymoglyphic Mermaid. Shown here are the brand new women's black v-neck t-shirt and the familiar women's tank top with a fishy new design, perfect for today's up-to-date young women and those who would emulate them! The full session is captured at Flickr. You can view the full range of museum shop purchase options at Cafe Press.
Posted by Jim Stewart at 10:09 AM No comments:
Categories: Museum shop
Newer Posts Older Posts Home
Subscribe to: Posts (Atom)