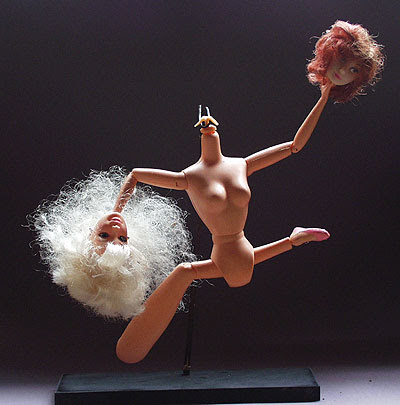 In primitive societies, there are often particular figurines considered to have great power within the culture. For us, the Barbie doll seems to serve that function. Such is the power of this figurine that she has managed to stay trendy for more than 50 years in the ever-changing worlds of fashion and toys. She has even penetrated the august halls of the Zymoglyphic Museum, where current events are rarely acknowledged and brand names hardly ever seen.

My niece went through a fairly heavy Barbie phase in her pre-teen years. One Christmas when we were visiting, she presented me with this rearranged doll which is now enshrined as the ultra-rare Surrealist Barbie of the museum's curiosity cabinet. It is still exactly as she gave it to me. Later, she sent me some heads and a few body parts for me to use in art projects (see note below). Then, no doubt inspired by her visit to the museum, she created Nude Barbie-zilla.

It turns out that deconstructing Barbies is practically a cottage industry. The prevalence of girls mutilating their Barbies in various ways was the subject of a recent study at the University of Bath. The Market Street Gallery in San Francisco hosting the fourth annual Altered Barbies show with more than 50 artists participating. It runs through August 27th.
Posted by Jim Stewart at 2:52 PM 1 comment:
Categories: Museum objects, Personal anecdotes

The Museum of Jurassic Technology has recently been enmeshed in the Museum of Dust's acquisition spree (a fate which befell the Zymoglyphic Museum not so long ago), with the MoD director proclaiming the MJT to be the "grandparent of all modern fictocryptic establishments".

I had heard about this museum for many years and had seen some of its traveling exhibits. I finally was able to visit it in person when I went to Los Angeles last August. The museum is often referred to as a "curiosity cabinet", which is generally a haphazard collection of interesting stuff, but the MJT model is really more an instructive academic museum with professional-looking exhibits, each examining some esoteric phenomenon in great detail. In this museum, however, the phenomena described may or may not be fictional, and the way the line is straddled is subtle enough to keep you guessing even when you know what is going on. The book Mr. Wilson's Cabinet Of Wonder: Pronged Ants, Horned Humans, Mice on Toast, and Other Marvels of Jurassic Technology

details one writer's attempt to cut through the fog of uncertainty surrounding the museum. It is, in a way, a highly rarefied version of a circus sideshow, where some of the freaks are real and some are not, but what really matters is the atmosphere created.

--Conversation overheard at the MJT, October 2000, quoted in this article

To me, the fascination of the MJT is the pure physical presence of the place, its dark lighting, well-crafted vitrines, surreal dioramas, and labyrinthine exhibit rooms, including a theater and a tea room. The image above is from a Flickr photoset of the MJT by The Blen that gives you a good sense of what the museum is like. It's interesting to compare the MJT with Steven Millhauser's Barnum Museum which, being made entirely of words, is not subject to any physical laws.

While not truly an inspiration for the Zymoglyphic Museum, there has been some pollination wafting our way from the southland. The physical existence of the Zymoglyphic Museum is important, in that it exists in a geographic location and has real objects in it, but there is more of an emphasis on outreach through photography and web presence than on perfecting the physical exhibit space. The Lower Jurassic is much more technologically oriented than the Zymoglyphic culture, which tends toward rust and decay anyway. The Zymoglyphic Museum, like the MJT, has sometimes been accused of lax standards in the factual accuracy of its presentations (which it can neither confirm nor deny), and both may ultimately turn out to be physical manifestations of the internal worlds of their creators.
Posted by Jim Stewart at 4:11 PM No comments:
Categories: Artists, Other Museums, Personal anecdotes 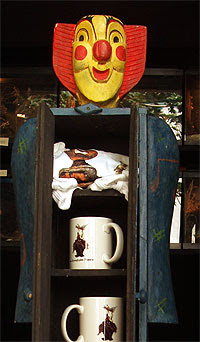 The Zymoglyphic Museum Shop is pleased to announce a new addition to its staff. Cheeky Pete the Clown is now in charge of the shop's drinkware division. He comes to the museum through the joint good graces of Shad McConnell of Portland, Oregon, and Judith Hoffman, of San Mateo, California, to whom the museum is greatly indebted. Mr. Clown faces a considerable challenge as the museum shop has not as yet sold a single mug or stein. However, we believe his seemingly eternal optimism will help to turn the situation around, preferably a full 360 degrees. In addition, we are confident that staff and patrons will now refrain making insensitive references to "those clowns running the shop". Visitors to the museum may rest assured that, like many celebrities, Mr. Clown is much smaller in person. 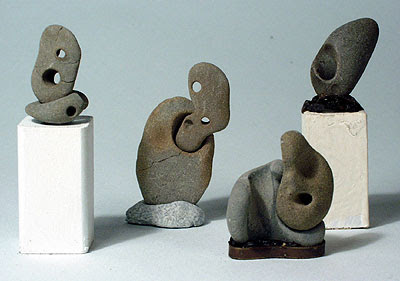 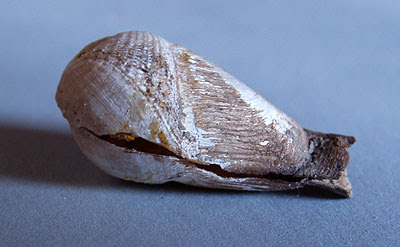 Recent posts here on Andy Goldsworthy and Hubert Duprat have covered collaborations between nature and people to make art. This is a common theme in Zymoglyphic culture, where the motto for artists is "Let nature do the detail work." The sculptures shown here are a collaboration among a boring clam (boring in that it drills holes, not that it is uninteresting), the sea, and a human eye and hand to select and arrange the results. The clam in question (a specimen from the museums's collection is shown here) is also known as a piddock. It is more torpedo-shaped than clam-shaped and has the ability to rasp its way into rock using the ridges on its shell and a rotating motion. It uses the holes it creates for protection. When the rock is broken up by erosion (often aided by the weakening of the rock by the clam holes themselves), the resulting fragments are worn smooth by wave action and cast up on the shore. The results often bear an uncanny resemblance to that archetype of modernist sculpture, the 3-dimensional free-form blob with one or more holes in it. These are prized by Zymoglyphic collectors. Some the museum's specimens of this type of natural art are featured in the Shoebox Art Galleries 1 and 2. Two of those sculptures have been gathered here for the group portrait; the rest are making their internet debut.

These sculptures can be seen as Modern Age descendants of the miniature viewing stones that were so popular during the Zymoglyphic region's Era of Oriental Influence. The boring clams themselves have their place alongside the Xenophora in the Zymoglyphic pantheon of molluscan artists. The clams are seen as true "sculptors", rather than, like the Xenophora, assemblers of found objects.
Posted by Jim Stewart at 9:18 PM No comments:
Categories: Natural art

Caddis flies live near ponds and streams. As larvae, they live underwater and make wearable tubes from local materials, such as twigs, sand, stones, or snail shells. The items they select are bound with silk and the larva hooks itself inside with the end of its abdomen. They are thus candidates for our stable of "natural assemblage artists" which include the bowerbirds and the Xenophora. The tubes serve various purposes - stones can be added to increase traction in fast-moving streams; irregular twigs make the tube (and its inhabitant) difficult for a trout to swallow. This may be considered more engineering than artistry, but in this case nature has a human collaborator. French artist Hubert Duprat has developed a method of getting the larvae to use more upscale materials, such as gold flakes, pearls, and sapphires, which would of course have no practical benefit in the wild and thus gets much closer to "art". Here is an interview with the artist as he describes the process in detail, and he and an art critic discuss whether there is actually a creative contribution from the insect in this "collaboration".

Here are some examples of what the caddis fly larvae build on their own: 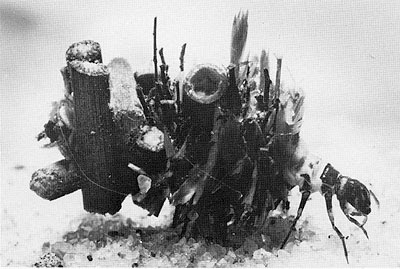 From the book Animal Artisans