The Pacific Museum of Anatomy and Science 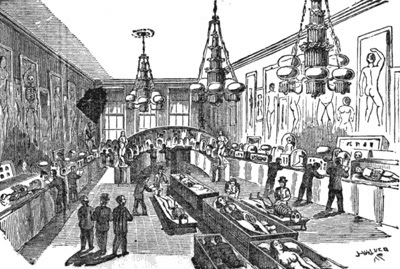 We previously reported on a San Francisco Chronicle facsimile of its 1865 Lincoln assassination edition, which contained a notice for the long-gone Gilbert's Museum. On the opposite side of the same page was a prominent advertisement for "The Pacific Museum of Anatomy and Science", located on Pine Street between Montgomery and Sansome. This educational institution, "For Gentlemen Only", specialized in wax models of instructive anatomy, most of whom were female, along with a collection of Egyptian mummies and preserved anatomical curiosities. It was a place where men fancying themselves refined gentlemen could gaze in detail on female anatomy in a civilized manner, foregoing the whorehouses, back alleys, and dangerous hellholes of the nearby Barbary Coast.

Popular anatomical museums were a common phenomenon in 19th century America. Unlike professional medical museums, which were intended for serious study by physicians, these tended to be sensationalist and scandalous while presenting themselves as morally uplifting. Many of the grotesque deformities and diseases (depicted in great detail in wax models) were attributed to immoral living, sexual misconduct, and self-abuse. The Pacific Museum ad touts a special exhibit on the 'evils resulting from TIGHT LACING...shown and illustrated by FULL LENGTH TRUTHFUL AND LIFELIKE FIGURES'.

A famous exhibit at The Pacific Museum was the head of the legendary Gold Rush-era bandit/folk hero Joaquin Murrieta, preserved in a jar. The head had been obtained from its owner in 1853 by a posse of rangers who needed proof that this person had in fact been dispatched in order to claim the reward offered by the governor of California. Whether that head was the same as the one in the museum is a matter of controversy.

The final fates of both head and museum are recounted by Richard Rodriguez:

The head, or another head, found its way to Dr. Jordan's Pacific Museum of Anatomy and Science on Market Street in San Francisco, where it remained alongside kangaroos in canisters and Egyptian mummies and the "amazing cyclops child". One April morning in 1906, the lid of the jar began to rattle; the head revolved in its brine. The jar with the head and all the other jars moved on their shelves, then crashed to the ground. It was the Great San Francisco Earthquake. A hideous stew bubbled on the floor for several days as the city burned. Dr. Jordan's Museum did not burn down but it never reopened. A janitor mopped up the gore and it all got thrown away or was buried somewhere. So they say.

Popular anatomical museums had disappeared by 1930's due to a combination of suppression by the authorities, changing tastes in curiosities, and the availability of competing venues for observing female flesh. A modern version of this concept (now available to both sexes) is the traveling series of Bodyworlds exhibitions and their imitators. Real human bodies are meticulously preserved, posed as if alive, and put on display for the general public to view. There is less emphasis on disease, but there is the same combination of high-minded purpose and morbid curiosity.

Days of Obligation by Richard Rodriguez devotes a chapter to the search for Joaquin Murrieta's head.

The Decline and Fall of the Popular Anatomical Museum, by Michael Sappol of the National Library of Medicine

For more information on topic of anatomical museums, we refer interested parties to the excellent Morbid Anatomy blog, which includes an exhaustive set of links to medical museums around the world.
Posted by Jim Stewart at 3:07 PM 2 comments:
Categories: Other Museums
Newer Posts Older Posts Home
Subscribe to: Posts (Atom)