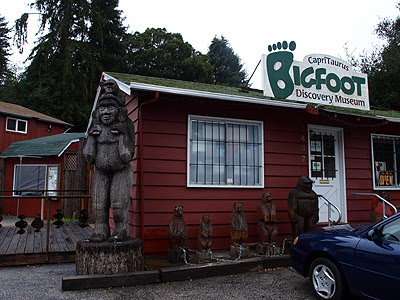 Mike Rugg had an encounter with a Sasquatch in northwestern California when he was four years old and has spent the rest of his long life gathering and presenting evidence to a skeptical world of the existence of these creatures. In 2004, he set up a little museum by the side of the road in Felton, a small town nestled in a redwood-lined valley north of Santa Cruz. Due to the elusive nature of the subjects there are very few artifacts of the creature itself, just some footprint casts, a couple of teeth of unknown origin, and some blurry video. Much of the collection consists of popular culture references to Bigfoot, including a collection of relevant Weekly World News issues ("I had Bigfoot's BABY!"). There is also a map of the Santa Cruz Mountains pinpointing recent sightings, a set of comparative skulls of other hominid species, and a diorama featuring two full size Bigfoot models. The diorama was dark and its contents appropriately difficult to photograph. 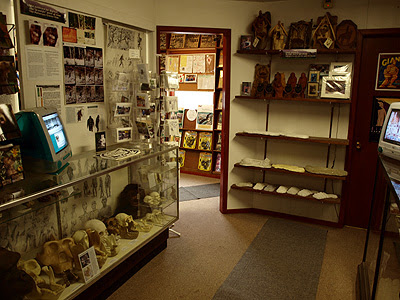 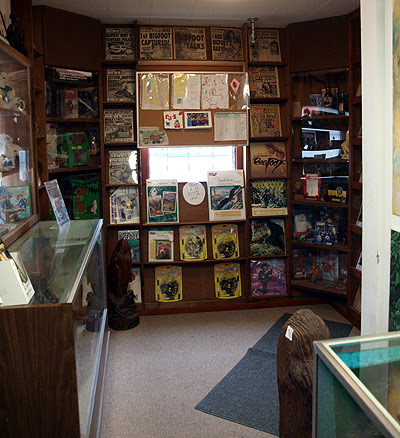 My own childhood did not involve any sightings, but I was fascinated by UFOs, the Loch Ness Monster and related phenomena. I grew up reading the books of Charles Fort and Ivan Sanderson. Fort was a chronicler of paranormal wonders such as rains of frogs, giant wheels of light observed at sea, poltergeist activity, and spontaneous combustions, events that once might have been called "miracles." Sanderson was a pioneer of the field of cryptozoology, which uses the modern language of biology to establish the literal existence of animals that might otherwise be considered mythical. Its basic premise is that it is at least possible that large unknown animals exist in our modern world whose existence is unreasonably denied by the scientific establishment. Usually, they can only be detected by indirect evidence, eyewitness accounts, and the occasional blurry photograph or film.

In its flesh-and-blood form, Bigfoot is presented as a surviving remnant of an anthropoid race ancestral to humans. It is believed to be omnivorous, sometimes taking fruit from local trees and snatching chickens from pens, but otherwise harmless. Some Bigfoot researchers postulate that the creature has magic properties and can turn invisible.

If nothing else, the Bigfoot Museum supports the idea that there is still some mystery in the world, that not everything has been explored, that there is hope for a discovery that shakes our everyday assumptions. It harkens back to the Age of Wonder when nautical maps sported mermaids and other fanciful sea creatures, a world view on the edge of science and magic. There is something significant on the periphery of our vision, and try as we might to get it into focus, it always manages to elude us. 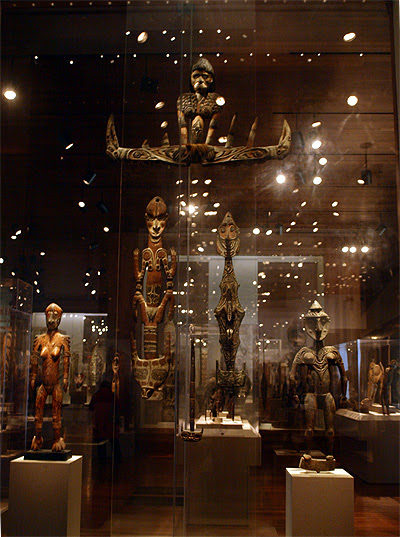 This past weekend saw a return to the de Young museum's ethnographic collections, first profiled here three years ago. This time I was armed with a new image-stabilized camera to meet the challenge of the museum's "no tripod, no flash" photography rules, with the results found here.
The collections are drawn from Africa, pre-Columbian Mexico, and especially New Guinea.
Most of these objects originally had specific roles in the spiritual life of the community. They have fascinated Westerners for centuries as strange objects from exotic realms. To some, they were grotesque pagan idols, representing ignorance and savagery, and to the Romantics a glimpse into a purer human, one more deeply connected to the basics of existence from which we as industrialized people have become alienated. Anthropologists collected, identified, classfied, and recorded these objects, as a biologist would do with natural specimens, and they are often still displayed in natural history museums. In the early modern era, artists, especially those connected with the surrealist movement, saw these object as having genuinely inspirational aesthetic qualities which could be appreciated independent of their spiritual function. Finally, oceanic imagery devolved into kitsch with the development of the Tiki culture.
One function of a museum is to try stop the passage of time, to preserve decaying things under bell jars or pickled in brine, bringing dead things back to life in dioramas, preserving the artifacts of the past. Encased in the sleekly modern architecture of the museum we see organic figurines, made of wood, clay, stone, or feathers, once living spiritual objects, extracted from dying cultures, forever frozen in action in their vitrines.

For another photographic perspective on this collection, see here.

The Pitt Rivers Museum in Oxford contains a wealth of ethnographic artifacts in a Victorian setting. Its Web site offers a
Posted by Jim Stewart at 9:29 PM No comments:
Categories: Other Museums, Photography
Newer Posts Older Posts Home
Subscribe to: Posts (Atom)