Kaolithic Curiosities at the Wonders of the World Museum 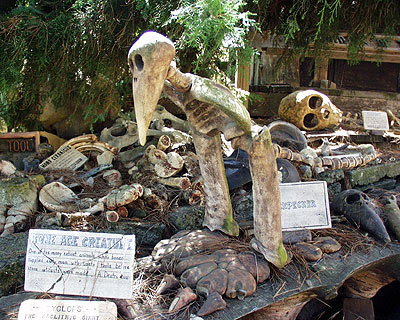 I don't recall exactly what drew me to Port Costa in the late 1970's. It's a tiny town in the outer reaches of the Bay Area, on the road to nowhere else, on a bank of the Sacramento River. Downtown consisted of some old buildings, a relatively large restaurant/bar popular with bikers, and a few antique store/curiosity shops. My attention, however, was immediately drawn to a storefront that housed the Wonders of the World Museum ("Stands Alone on Earth"), presided over by one Dr. George Gladstone.

Wonders indeed. There were many fascinating exhibits, many of which dated from the Pre-Credulous Era of the Bone Age, when fossils metamorphosed into ceramic instead of rock by a process known as Kaolism. Hominids in that age came in a huge variety of sizes. There was an 8-foot high Bigfoot with a triple-jointed penis bone, whose variety of functions Dr. Gladstone described in detail, and a numerous lilliputian race dubbed Homo Ceramicus. Two skulls of the latter were later acquired for the Zymoglyphic Museum's curiosity cabinet. Shown above is a rockpecker, whose skull could be used as stone-shaping tool. As a complement to the fossilization process of Kaolism, I learned how life can be created from mud, albeit with some unusual results.

The visit turned out to be good timing, because the museum was only in existence for a few years. It left a lasting impression on me, though, and when I finally had my own museum, I thought I would seek out the man behind Dr. Gladstone, Clayton Bailey. Three years ago, in July of 2003, I contacted Clayton via e-mail and he was gracious enough to give me a tour of his studio. He still lives in Port Costa, behind a fence topped by ceramic gargoyles of his own making. The big studio contains a large herd of robots, all of which are descended from a single robot originally designed to retrieve specimens for the museum from outer space. Instead, that first robot took over Clayton's brain and commanded him to create more robots. The Kaolithic Curiosities are now resting picturesquely in the yard (see above), maybe to be re-excavated and analyzed by a future generation.

Although seen by some as a "mad scientist", Dr. Gladstone's archaeological research methods have been an inspiration to the Zymoglyphic Museum curatorial staff.

Check out the Ceramic Wonders, especially the face jugs

Reference book: Clayton Bailey: Happenings in the circus of life

Thanks for telling us about this GREAT web site!!

A house in Port Costa also had an astonishing doll museum, Muriel's Doll House Museum. It closed in 1990 when the owner and guide, Muriel Whitmore, died.

Glad to find your site today, as a fellow San Matean.