The new incarnation of the de Young Museum in San Francisco 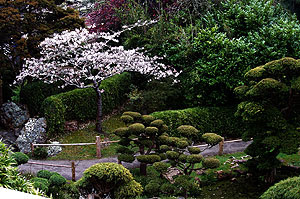 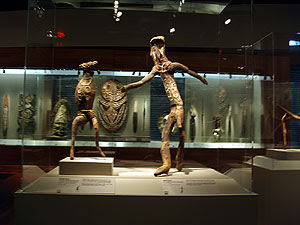 We headed up to Golden Gate Park to visit the de Young Museum last weekend. It was the latest in a long series of wet days. We stopped off first at the hundred-year-old Japanese Tea Garden next door. The cherry trees were blooming, the moss was thick and glistening in the rain, and the raindrops made rings in the ponds. The garden is a sublime example of creating art from nature. As you walk the paths, each turn creates a new picture, a composition of mossy rocks, water, pagodas, and plants, even incorporating the surrounding cypresses and pines. In contrast, the de Young museum is a brand new building, a completely rebuilt version of the old museum on the same site. The approach is along an unnecessarily narrow sidewalk hunched up against the external wall of the museum, which is a featureless monolith with no protective eaves. At the door, you are forced to stand in line in the rain to go through a security check. Once you are in, you can take a stairway down to the special exhibit area with steps which are too wide for a single step and too narrow for two so that you have to sort of limp your way down.

According to the museum's history page, the de Young, founded in 1895, was originally a curiosity cabinet of sorts, housed in an Egyptian style edifice.

During the next twenty years [de Young's] taste for the curious, intricate, and ornamental was reflected by acquisitions of painting and sculpture, arms and armor, fine porcelain, objects from South Pacific and American Indian cultures, including original art objects as well as reproductions. Visitors to the museum seem to have shared de Young's interest in such diverse objects as sculptures, polished tree slabs, paintings, a door reputedly from Newgate Prison, birds' eggs, handcuffs and thumbscrews, as well as two cases de Young had at last filled with a collection of knives and forks.

Pity. The city could use an attic!

In the early 1960's, the de Young decided to "de-accession" some of its holdings that were not part of its more modern focus on art, antiquities, and ethnographic artifacts. My dad, then a biology teacher at City College, was there, and picked up these two taxidermied birds, which are now part of the Zymoglyphic Museum's collection, creating a nostalgic link with museum history. 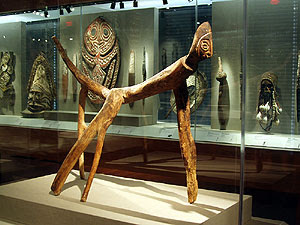 The evolution of the de Young is not all negative, however. It has always had an excellent collection of African, Oceanic, and Pre-Columbian artifacts and has recently acquired a large private collection of artifacts from New Guinea. This collection was the highlight of the trip. Shown here are "spirit figures" from Papua, dated at a few hundred years old. The label says:

Imunu are unique spirit figures obtained from the root of the Mangrove tree. A carver or spirit man dreams of an image and the goes to "find it" in the forest. A similar tradition is found among certain Inuit people, where the shaman dreams an image and then seeks it out among the driftwood on the beach

The collection is nicely documented in the book New Guinea Art: Masterpieces of the Jolika Collection from Marcia And John Friede