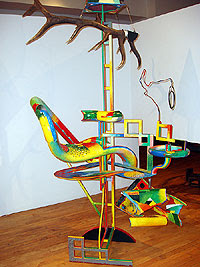 I took advantage last weekend of a rare sunny day to motor on up to the Sonoma County Museum in Santa Rosa for a retrospective of Robert Hudson's work. Hudson has been working in the Bay area since the 1960's, creating works that are a wildly improbable mix of elements - taxidermy, brightly colored paint, welded steel, furniture, geometric elements, farm tools, natural objects like sticks and antlers, ceramics that look like sticks and rocks, wire, rusty metal, pictures, and a variety of both unusual and ordinary found objects. Somehow it all works together in a way that creates a complex but balanced and unified object. To me it is a curiosity cabinet approach that ends up as a constructed sculpture, an integrated object instead of just a collection of objects. 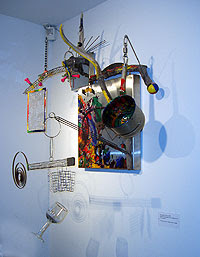 Works shown are "Outrigger" (1984) and "Panoramic Vision" (1996). Hudson has only a scattered internet presence. The best reference for his work is the catalog of his 1985 retrospective at the San Francisco Museum of Modern Art: Robert Hudson: A Survey