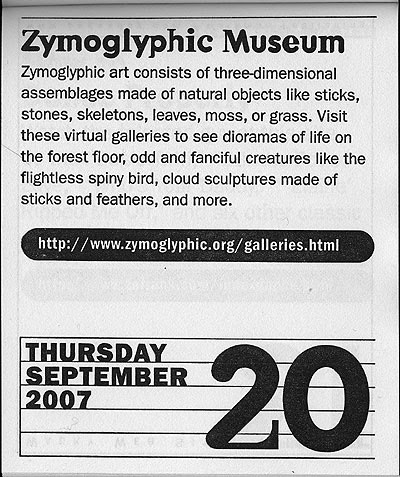 Now, our curatorial department might well prefer a grad student or two to write a scholarly treatise on the museum instead of the "wacky web site", or "zymo-what?", approach, but we will take what we can get. The museum has yet to find its Lawrence Weschler, who chronicled the Museum of Jurassic Technology. The Museum of Dust has come pretty close when not distracted by territorial spats and interplanetary intrigue. We and the MoD were featured recently on BlueTea's virtual museum tour, and this Live Journal entry was particularly endearing. We offered her a job, but she ultimately declined. Other blogosphere musings on the museum can be found here, here, and here.
Posted by Jim Stewart at 8:29 AM
Categories: Museum news

Congratulations, I'm glad you're starting to get some recognition. You deserve it -- what you do is great!