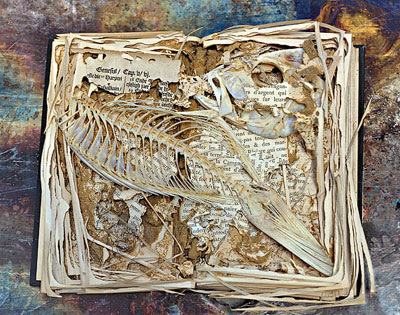 Rosamond Purcell has a long history of providing inspiration to the Zymoglyphic Museum as a photographer of museum specimens, a scholar of curiosities, an exhibit curator, a writer, and an assemblage artist of decay. Her photographs of natural history museum specimens earned her a place in the museum's Photographers of the Marvelous online photography exhibit, and her use of natural light in these pictures has been an inspiration to our own curatorial department's attempts to document our museum's collections. One of her collaborations with Stephen Jay Gould, Finders, Keepers: Eight Collectors

, includes the story of Peter the Great's Kunstkammer in 18th century Russia, and, in particular, his acquisition of Frederik Ruysch's collection of anatomical dioramas and other preparations. The book includes Purcell's photographs of some of the few remaining Ruysch objects . Further research on curiosities and marvels led her to write Special Cases: Natural Anomalies and Historical Monsters

, examing the historical significance of marvels.

In 2003, Purcell curated a traveling exhibit called Two Rooms. One room was a reconstruction of a small but historically important natural history museum created in the 17th century by Ole Worm. The other room featured a reconstruction of Purcell's own studio/museum, with walls of rusted metal sheets, a library of decayed, worm-eaten books, and arrangements of a variety of objects transformed by nature and weathering. Most of these objects came from a single source, a vast junkyard in Maine which she has been mining for aesthetic gold for two decades, and whose story is told in the book Owls Head

Her new book Bookworm: The Art of Rosamond Purcell

finally showcases her photographs of her own found and created decayed objects. The range is a mix of weathered objects and textures, photographic collages, and assemblages constructed for the purposes of the photograph. Shown above is "Book for Fishes", combining a fish skeleton with an old, insect-eaten book found in a Harvard library. For a preview of the book, see the slideshow/review at Slate.com 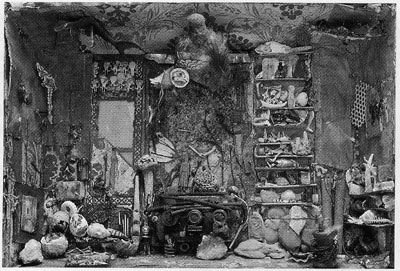 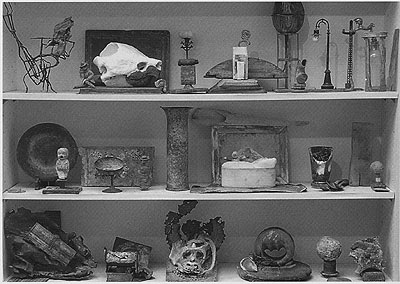 There seem to be still more Zymoglyphic inspirations which have yet be fully documented. Above are two photographs from "Two Rooms", the exhibition catalog. The top one is a "miniature museum" from 1994, similar in spirit to the Zymoglyphic shoebox art galleries and the bottom shows a number of objects on display in her studio, any of which would be at home in our museum.
Posted by Jim Stewart at 10:03 AM
Categories: Artists, Natural art, Photography